#1
Hey Survivors,
We are proud to announce that the ‘Alpha 19 Streamer Weekend’ is finally here. We have partnered with over 170 streamers from 30 countries.

Many will be streaming all weekend and giving away Free Keys. Check their channels for their upcoming weekend schedules. These are being broadcast in many languages so click the image below to find yours. 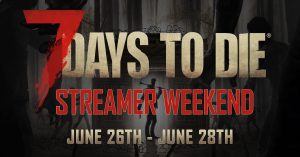 TFP is extremely excited for this release. It’s as big as the last couple alphas and is packed full of new content, bug fixes, optimizations, and game balancing. Read on for more information!


Alpha 19 has gotten a huge visual upgrade with the switch to Linear Color Space Lighting. We have finally achieved full PBR Physically Based Rendering and all of the art has been adjusted to look better and compatible with it. Normal maps look better, bright lights don’t wash out the scene and so much more. It’s hard to describe why it looks better you’ll have to play it to see for yourself.

The video option to adjust gamma has been changed to brightness, so it works with the new lighting. It also has a more balanced range of darker to lighter adjustment.

Lights now use a priority system, so close lights are updated rapidly to reduce visible jumps in their intensity and range.


We have combed through all game-pad functions making sure everything is up to date and working and we also improved defaults like for driving. Additionally we added a new reverse directions for block rotation placement.


We gutted the old ISS or interactive survival system that blackened and clamped your health and stamina bars from filling because it was confusing to players. We replaced it with an all new critical system.
All critical injuries that blacken or clamp your max health or stamina will be caused by a new critical buff on the left of the screen. These new critical buffs are clickable, taking the player directly to the player status effect screen where you can read about the problem and its cure.

When you are at full health a zombie can never cause a critical on the first hit so we don’t want to hear about unfair crits! =) Once you take a few hits, or get reckless in close combat the chances increases. Being at low health also increases the chance of receiving a critical. Armor reduces this chance by a flat amount, creating a buffer that enemies must overcome before they can hit you with criticals.
Some criticals are incremental. A sprained arm makes you vulnerable to getting a broken arm.
Some injuries don’t take kindly to being ignored. Sprinting or jumping with a broken leg will not work in your favor. If an injury is affected by an action like that then the buff icon will blink briefly and you will know that something happened.

New and reworked critical injuries include:


We’ve added food and water bars under the players belt inventory blue for water level and green for food level. You will see them go up and down based on your current hunger level.


We have overhauled and re-imagined many of the characters in HD. They may look better but they have less draw calls and are slightly better in performance. New HD zombies include:


TFP have again teamed up with Native Darkness Productions to make the Alpha 19 Dynamic music system more robust while adding a ton of new content and features.

The propriety Dynamic Music System algorithm measures and uses many player-centric conditions such as player location, biome, time of day, inside or outside a location, nearby aggressive enemies, threat level and more to tailor a custom movie like musical experience for the player.

Exploration, suspense and combat are procedurally generated providing a complete musical arrangement from a set of interchangeable loops. As of Alpha 19 there, are 31,558 unique combinations of music.

We are very excited to unveil this system and we hope you enjoy this new addition to the 7 Days soundscape.


Enemy progression has been re-balanced. The chosen game difficulty no longer affects the game-stage value and player parties accumulate roughly 2/3 of the combined game-stage that they used to.

Loot distribution has been smoothed out so that you do not find end game loot too soon and have no more upgrades to look forward to.

Loot has been balanced to provide a smooth progression from primitive, iron and steel items. This change provides a steady progression for the player and gives some incentive to craft, while slowing the economy a bit early game.

The loot quality for player parties is equivalent to that of the highest level player and perk effects like Lucky Looter are not shared. The only loot advantage is that parties face tougher opponents which have a higher chance to drop loot of better quality.

There are 4 tech levels of items in the game. These start appearing in loot at the following Game-Stage intervals.


Trader quest rewards scale similar to this system. You won’t immediately get a shotgun for a day one quest.


We added a brand new Nav Objects On-Screen Sprite System to help players more easily locate important items in the world such as fetch quest containers, player backpacks, spears and more. We are using this system on many of the harder to find important items and events in the game.

The new Nav Objects On-Screen Sprite System, which govern the On Screen Icons, Compass Icons and Map Icons. These functions are easily configured in the XML and allow adding custom Nav Objects for Entities, Quest Objectives and Items for those who enjoy modding the game.

Some of the items that are using the new Nav Objects On-Screen Sprite System include:


We added a ton of new Remnant locations to the Game so there are lots of smaller low enemy count locations to explore, loot and take over if your not ready for a Tiered challenge.

We have updated Navezgane significantly increasing the playable space into the radiated zone with new roads that lead to new developments adding many new POIS or locations that were never in Navezgane before or updating cities. Locations include:


We have improved Random Gen in A19 to use every POI possible in the game so players will see the breadth of content like never before along with a lot of tagging updates and improvements. In fact an A19 Random Worlds can have over 500 unique POIS!

We’ve re-imagined tons of older locations with a complete art and game-play overhaul converting them to beautiful and quest-able dungeon experiences and added many brand new locations to the game. In all over 40 new or updated locations and counting. Some of the new or re-imagined locations include:


The Art has grown much bigger and have made some major improvements including:

Tech level 3 – we’ve added a whole new line of weapons to give you the firepower you will need to face future special infected, bandits and more!


We have added candy to the vending machines, they allow players to have a short term modification to game-play and provide a few calories:


We have restructured existing perks and removed others so auxiliary perks don’t always have 5 ranks, as well as reduced some attribute requirements for auxiliary perks. This was changed to give less desirable perks more bang for the buck.


A dynamic resolution system has been added that allows the game to draw 3d graphics at a lower resolution than the main game window is running at. This can increase FPS while allowing the UI to run at full resolution.

Dynamic resolution is disabled by default. It can be enabled in the Display tab of Video Options. There are three settings:


We have done a number of improvements to vehicles listed below.


We have partnered with Super Nimbus and GameSparks to capture game analytics from Alpha 19 to Gold. We plan on capturing many things to help balance the game and improve the overall experience only generic game-play data all of which is already been covered in our EULA. For Alpha 19 we are capturing the most important data for balance and progression.

Some things we are capturing include: